Yesterday, D.C. Rainmaker generously spent about 14 hours with me (OK, three), teaching me how to change the tire on my bike. And then he taught me how to change the BACK tire, too! Because you know, it hadn't ever occurred to me that the back tire might go flat. There's all that stuff back there. Scary looking, complicated, bike stuff.

But before I ingratiated myself into his headquarters (watch your head or you'll hit the kayaks hanging from the ceiling, no kidding, is there any sport this man can't do??), he had to first TALK ME INTO GETTING THE BIKE INTO THE CAR. Which involved taking off the front tire. I actually printed out his directions and read them while performing. Cuz performing was what I was doing in my parking lot at work (where I keep my bike), trying to read while unscrewing this and moving the seat, and the pedals...well, heck, I'm might as well just share it all with you, should you ever have a need.

Tips for getting bike in back seat of car:

1) Take off front wheel.
2) Move forward passengers seat
3) Open rear passenger side door.
3A) Adjust the pedal so the left pedal is up, and the right pedal down.
4) Insert fork into the car first, in a downward motion towards where the right rear passengers feet would be
5) Right before your fork reaches the midpoint of the car, pull up on it (while now pushing your seat post down into the passenger foot well)
6) The fork should now be behind the drivers seat, angled up and slightly back - close to the left rear window
7) Adjust a bit so that the rear wheel is now in the right-rear foot well. The pedals should be at the mid-point of the car.

In theory, your bike will now be in the car. I can show you the trick as well once you arrive. I've yet to find a car (no matter how small, including some really tiny rentals) that it doesn't work on.

It worked. The man is a genius.

Now for the hard part, getting it back out. Ha.

(Don't feel bad, we bikers know stuff like this.)

First, he pulled out a box of rubber gloves (I am so not making this up). Then the teensiest tool set I'd ever seen: 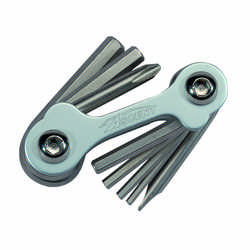 Plus, some tire-taker-off tool thingys: 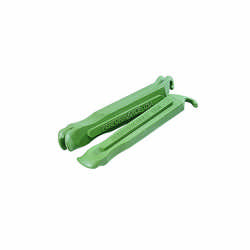 This was gonna be good, watching him.

Oh, what's that? Who, me? You mean me? You pointing at ME? In his quiet, laid-back way, he started barking commands: Insert this, move that, squeeze this, align that.

I asked him how long it took him to change a tire. I think he said one minute. After an hour, I finally got the brake thing released. THEN, I started trying to remove the tire. (I could kick myself for not bringing a camera.)

Mr. Rainmaker is the perfect instructor. Unbelievably patient, thorough, and willing to stand by while watching me contort myself to perform the simplest maneuver. Like put a valve through a hole. I mean REALLY, how hard can that be?? I finally finished the front tire, and though it was getting late in the day, D.C. insisted I learn how to change the back tire.

And a few hours later I had finished!!

After accidentally breaking the valve. "Never mind," he said, "It will be good experience for you to change the tube at home." Err, right!

I was so excited I wanted to stop everyone I met and tell them that I, me, Jeanne, now know how to change a flat tire! And, not only that, I could also load a bike into a car. In fact, I did regale my lunch companions today with my prowess.

I feel so...clever! And exhausted!

So, today, I set out to fix the real flat that I had accidentally caused yesterday. Which required a trip to the bike shop to get some tape stuff...nevermind.

And an hour and a half later I had finished!

Obviously on a roll, I then tackled screwing on the cutest little bike pump (I had asked DCR, "Doesn't that require drilling??"), which, no, it did NOT require drilling, it just attached to the holes underneath the bottle holder.

Getting that bike pump holder on was so easy, I started feeling like maybe I just could build a house one day. Tools are our friends! 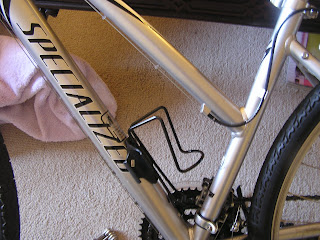 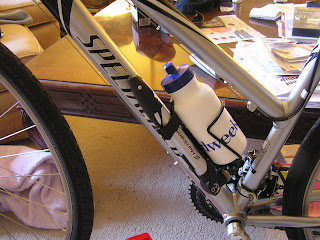 The good news is: I can change a flat tire.

The bad news? By the time I finished, there was no time left to actually RIDE the bike, which I'm just guessing here, is kind of the point of all of this.

And the lesson is: BIKERS ARE AWESOME PEOPLE.
Posted by jeanne at 7:07 PM

Happy to help! It was cool meeting up!

Good to see you got the new tube and pump all sitautioned!

Jeanne, really, in a race, they have people driving around in case people get a flat. You crack me up. If you pump your tires over what they should be, you shouldn't have to worry about getting a flat anyways. :0)

Why hasn't anybody invented a bike tire that doesn't need to be changed. That would help a lot.
Congratulations on your achievement.. and your new know-how!

Ohhh mate I feel your pain about getting your bike in the car.....seriously, before my last sprint tri I reckon I spent about an hour working out how to get the b#$% thing into the car - which I have done approx 500 times before!
Snort and LOLROFL about the bottle cage photos.
The best way to get good at changing your back tyre is to have 2 flats in 2 weeks, or was that just me?
I have those tools in my seat bag! And gloves too! (and baby wipes - they get grease off really well!)

i think you have a new crush. will spinboy have to compete to star in your naughty dreams?

I need that lesson, also! I have yet to do anything but ride. I am in trouble...

Judi obviously never experienced the two flats in two half Ironmans that I did.... really would have ruined my day if all I could do was sit on the side of the road and wait HOURS AND HOURS for the sag wagon! As it was, they cost me about 15 minutes each and I finished each of the days with a medal.

And that's cyclists, btw. Bikers have engines on their vehicles. :-)

I'm gonna print out those instructions. :-)

Yes, we bikers are awesome. But, Jeanne, you work with several such awesome people, they could have shown how to do this ...

OMG, I think we have the same bike! And you are a far better woman than me, knowing how to change a tire and not having even done a tri yet! I am not worthy! One thing you failed to mention, and I'm sure you would figure this out for yourself eventually, is to make sure the bike is in the car so the chain is not rubbing against the seat. Its bad enough getting the stuff all over you when you ride, put it in the car, change a tire, but to have it all over your car forever hereafter is well, pretty much standard I guess. I keep an old towel in the car (and now a drop cloth since I have a hatch and can lay it down). Much easier to fold that up when someone else is riding than have to worry about chain grease getting all over everything.

I think you should get a bigger car, it would save a lot of bother with that bike!

I'm with Nancy - you cannot rely on the sag wagon and now you don't have to! I actually did get a flat one day when I was out all by my lonesome. I was so glad I had taken a 'change your flat' class, too.

I loved this post - I could really relate! The first tire I had to change was in the back - and I had to have A LOT OF HELP to get it back on. And, watching out for the valve? Why the heck do they make these things so easy to break? I don't know that I could do it again myself.

So, people use gloves? That's the part I told my husband that I hated most about changing a bike tire - all that stuff on my hands! He laughed at me when I suggested gloves! I'm going to tell my husband about this post.

I have an extra duffle bag for all that stuff you're carting around now.

evilness has overtaken you

I am very afraid

Good for you! You shouldn't ride your bike any significant distance without knowing how to change a flat...especially if you do group rides or race. A flat can strike at any time and for me it always seems to be in 3s!

Another secret: There is a REASON that cyclists wear black shorts, and that's because you wipe the grease on them. Rubber gloves are fine for carrying on recreational rides, but for races they're just timewasters. Plus you've got your cycling gloves on already, right? At least you do if you don't want to scrape your knuckles down to the bone when you crash... that's WHEN you crash, not if you crash.