It was fun visiting Austin, although what I mostly saw was the inside of the world's largest convention center. And it never failed, no matter which end I was at, I needed to be at the other end.

I left Austin late Wednesday (just as the music festival was gearing up, not that I minded missing MICHAEL STIPE! RICHARD THOMPSON! BILLY EFFING BRAGG!), which left time for one quick run, a morning movie, a drive to the hippie-dippie part of town, and brunch.

The first celebrity (not counting Dooce): 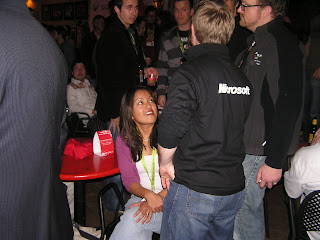 (Bex getting hit on by a Microsoft guy at the Microsoft party.)

Yes, Bex was my first celebrity meet-up, looking terrific as usual. She was there working, as was I, so we had limited time together, but met up most nights to trip the light fantastic. 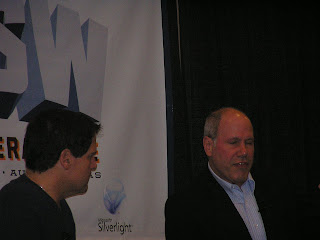 Vuguru is some kind of internet-video thing that produces shows that no one (well, no one outside of that room) has ever heard of, like Prom Queen, and the soon-to-be-launched All-for-Nots, which I think is a show about a real band, called, curiously, the All-for-Nots.

Later that night, I went to the All-for-Nots coming out party: 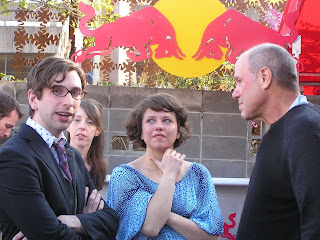 After hanging around for 1 1/2 hours, chatting with some lovely people, I left before the All-for-Nots made their appearance, because, well, I was bored silly. (Kind of like you are at this point.) Oh, and it was raining. And we were in a tent.

Wednesday morning dawned with blue skies and temps in the 50sF. I was determined to run in Austin before I left, so drove down to the River, which in Austin is called a Lake, and ran on a lovely bike and hike trail: 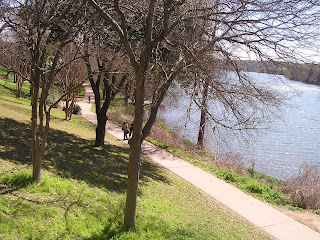 Where, halfway through my 3-mile run, I fell.

Time for a movie! I saw the premiere of "Throw Down Your Heart," about "banjo virtuoso Bela Fleck on his journey to Africa to explore the little known African roots of the banjo and record an album." I like Bela Fleck. Plus? It was the closest screening. (I give it a thumbs up.)

After that, I drove to S. Congress Street, which my new Austin friends (shown here at the famous "All-for-Not" party) 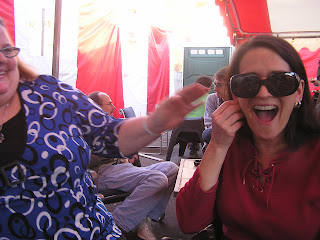 had assured me was the place to see and be seen.

I headed for brunch: 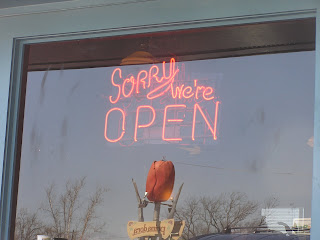 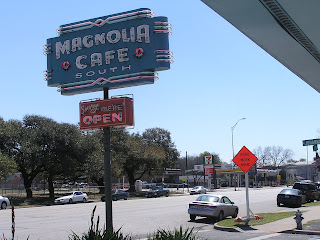 The perfect way to end my visit.

Now if only someone would explain this statue to me (I didn't have time to get out of the car to look): 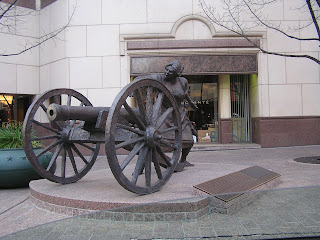 And I leave you with this, a SXSW street scene: 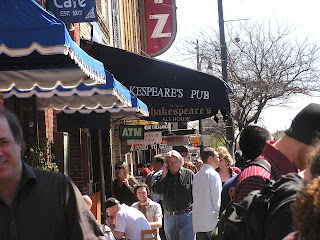 Now I am off to learn how to change a tire—a bike tire, stay with me here—courtesy this guy.
Posted by jeanne at 1:15 PM

That falling thing - you do that a lot, don't you?

I won't mention any celebrities I saw recently, I could not keep up with you.

You have yet to talk my out my jealousy that you were there and I was not.

Danielle in Iowa in Ireland said...

Jealousy abounds! Your job must be a lot more fun than mine.

And... the conference center I was just at was a half mile long. I think I probably have you beat :-)

it's the colorado river that becomes lake austin. it's all about the name. like the world series. which really should mean the u.s. and a few canadian series.

i'm not a fan of mark cuban. gas bag.

and here is angelina eberly and her cannon of doom:
http://en.wikipedia.org/wiki/Angelina_Eberly

What a cool time!

You do not have my sympathy--it sounds like quite a party. Did you talk to Dooce? I haven't read her in a while, but I think she's really funny.

You do have my sympathy about falling down. Good for you for getting a run in, though.

Looks like it was a great trip, minus the fall. :)

Did I read that you visited hippie hollow? Is that STILL there?