I tried a little experiment last week. Instead of scheduling workouts and then blowing them off and feeling guilty, I decided to just take the entire week off. No early wake ups, no swimming, no biking, no running, no spinning!

The result? I felt like crap. Plus? I still felt guilty anyway.

I took off Monday through Friday, and I can't say I recommend this lethargy thing as a strategy, though it did hold a lot of promise. Every day I still felt like I had climbed a mountain. My legs hurt. And of course I still woke up at 6 a.m. And I was kind of miserable. Post-tri season depression? Maybe.

But we all know that I can't workout unless I have a goal. So, after much thinking and tossing and hemming and hawing, I decided that I need to get reacquainted with my oldest blog companion: Running.

But you knew that already.

My initial target is the Fredericksburg, Virginia Blue-Gray Half Mary on December 13, which I have run twice before.

But I decided to up the ante a little and sweet-talked Number One Daughter into doing a half-mary with me (her first! Her longest race to date has been a 5k! Bwahahahah!) However, clearly she was going to need something more compelling than a trip to Fredericksburg (no offense).

I looked at Austin. (I do love Austin!) But it's not until Feb. 14. I'll need to be at home fending off all my admirers that day.

So, we looked near Austin: Dallas! (Whatever. I don't really do Texas geography.)

We put the call out to our favorite Dallasian: Runner Susan.

She responded: How about you guys can stay with me? I have plenty of room. I'll heat the hot tub and serve you wine. (Deirdre to me: "Do you think she'll take us shopping?")

I'm going to try to actually stick to a plan. It's a been a long time since I had a plan. I loves me a plan. I'm looking at good old Hal's intermediate, or good old Jeff Galloway's half.

Today was Day One of the get-yourself-ready-to-run week. I ran 3 miles in 34 minutes.

Nation's Tri Race Report: How One Woman Turned an Almost-DNF Into a PR

I'm like the boy who cried wolf: I always say I'm not ready, so people tend to tune me out. But this time, I was really not ready.

I haven't been sleeping well. My training wasn't what it should have been. I wasn't mentally prepared. Plus, Saturday I had an argument with the kid so I was a wreck emotionally.

I seemed to spend a lot of time before they closed transition just staring at my set up. Maybe I was asleep on my feet. It was weird.

(Sidebar: Big shout-out to TIM! an underground reader who recognized me from these pages. HI TIM!!!)

The ladies around me were unfailingly nice and kind, although one had a little trouble with which way to rack and then where to put her stuff. Luckily, this guy is now an official and was on hand to strong-arm her ("hey I think it might be easier if you put your stuff on the other side..." Adam was fresh from a stellar performance at his first SECOND half-Ironman, the day before. I don't even know how he was standing up!)

Soon transition closed and me and 5,999 of my closest friends moved into the holding pen.

I was feeling jittery, like I was hepped up on caffeine, even though I hadn't had any caffeine. I was cold and tired, and my susceptible brain was busy remembering every swim scare story I'd ever heard. I was trying hard to counter all of that by remembering how many times I've done this, and my new favorite line heard the day before at packet pick-up: Swimming is when you get to lay down!

There was a slight breeze, and the water temp was a refreshing 72F, so wetsuit legal.

Into the water, wait 3 minutes, the horn blew and off we went. My legs felt constricted in the wetsuit. I swam for maybe 10 minutes, trying to loosen up and relax. No go. I suddenly knew that I was done. DONE. I wanted no part of this. I was exhausted, I was upset, I had zero confidence, and the buoys just looked too damn far away.

I looked around for a kayaker, and waved to her. She quickly paddled over, and told me to hang on to the end. I told her I was DONE, it was OVER, I wanted OUT. She told me I could rest and then go on if I wanted. No, I said, I am DONE. She had to keep shooing me back to hanging on to the end of the boat; I guess I thought I was going to climb in with her, but no, she had to signal to the jet ski guy. I was so relieved that I was finished. I told her how I'd swum this distance many many times, and I didn't know what was wrong with me. I told her this would be my first DNF. She (cleverly) said it didn't have to be, that I could still start up again if I wanted. Nope, I'm done, I said again.

I hung on for a few minutes, waiting. I starting thinking about all your comments, and about how I was going to explain this to everyone, and how I was going to feel getting my bike and going home. I thought of AJ, and I actually thought of that cheesey saying, "Pain is temporary, quitting is forever." I thought, well, what the hell, if I have to wait, I might as well swim while I'm waiting. I asked "my" kayaker if she would stay besides me while I tried again, and she said sure. So I started.

Major suckfest. I'm not fast but I'm usually pretty steady. Not today. I ended up doing a lot of breast and side stroke on that first leg, which made it seem like I was swimming on a treadmill.

At some point my kayak escort judged that I was going to make it, and took off. I looked around and realized I still had plenty of company.

After about 10,000 years I made it to the first turn and starting swimming across the river, parallel to the bridge. I think it was here that I finally finally FINALLY got into a rhythm and starting swimming freestyle, counting strokes to try to focus my mind. And from then 'til the finish I passed people like they were standing still. Damn, I'm a good swimmer!

It was a miserable, horrible swim. I was pleasantly surprised to see my watch reading 45 minutes when I finally exited.

I'm guessing that my mental freakout meltdown cost me at least 10 minutes. But yay to the 10th power to me for finishing that swim. God must have been with me because there is no way I finished that by myself.

My heart rate was skyhigh. I took my time in transition

The bike course was beautiful and I tried to enjoy it but my legs felt like lead. Despite there being 6,000 people on the course, I spent a good deal of it by myself, right up until the last turnaround when I finally got some kind of groove going.

I spent a few miles leapfrogging with two guys, a son and his father. The son was FILMING the dad as they rode, which meant that most of the time they were either riding side-by-side, or drafting, and of course the son wasn't exactly watching where he was going. These guys were a mess, and a menace.

WHAT IS IT WITH PEOPLE WHO REFUSE TO FOLLOW THE RULES??

I told them to please move over, that they were riding dangerously, but they ignored me. I finally dropped them because I was really afraid to ride near them. Fear, ladies and gents, is apparently what motivates me to push.

In fact, I was pushing the entire way. Was there a headwind? It felt like it. The course was relatively flat. I concluded that that I was just undertrained. My long weekend training rides, with their long leisurely stops, were just insufficient.

Despite everything, I managed to beat my bike time of last year (1:46), which should have made me happy. But by this time I was on automatic pilot, just trying not to think.

Last night I had figured out that if I ran 13-minute miles, I would PR on the run. Now, 13-minute miles sound quite doable in the abstract, don't they?? I mean I can WALK a mile in 15 minutes.

My heart was pounding as I left transition. The run out was right next to the FINISH line, where hundreds of spectators lined the finish chute, and tons of athletes who had already finished were milling around. It was rough.

And here is where 21st Century Mom gets a big shout-out for encouraging me to run after every bike ride, which I faithfully did. And thank God. 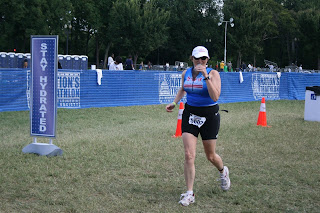 Run out, scarfing a gu. Thanks Ray! 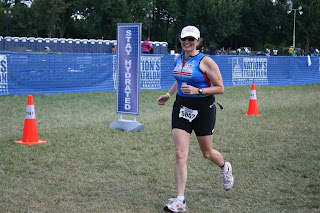 No matter how bad I feel, stick a camera on me and it's all sweetness and unicorns. 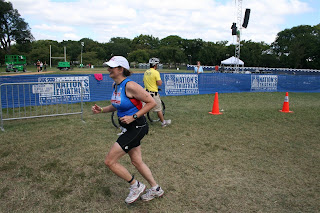 I programmed my brain to make me run for 13 minutes at a pop. If I took a 2-minute walk break, I still had to run 13 minutes. This strategy actually worked.

If I had a dime for every person who encouraged me and told me "looking good," I'd be a rich woman. My DC Tri peeps were at the mile 5 water stop, where I ran thru a gauntlet of high-fives. I love my peeps.

I was dizzy. My stomach was a mess. Every part of my body hurt, but especially my shoulders. Carrying a bottle of water felt like carrying a 10-lb barbell.

Miserable as it was, props to the race organizers for moving the finish next to transition, which meant no 1.5 mile walk back, like last year.

I walked back to my bike and just sat on the grass for a while til I got the strength to pack up. I headed toward bike out, and stopped by an abandoned water table to fill up my water bottles when a volunteer yelled to me not to use the gallon jug of bottled water because someone had just taken a swig from it. "Dude," I said, "I just swam in the Potomac." I laugh at the germs on a water jug.

When I finally reached bike out, it was locked up. Last year this was one of two exits, but not this year. I almost cried. There were about five volunteers there, so they could have easily been checking people out. One of them, obviously a saint or an angel, or both, took pity on me and opened the gate for me. I think he could tell I was about to lose it.

And then I drove home, feeling sick to my stomach and weak, and just wanting to get into bed.

Also: I have a the greatest friends in the world. Many many thanks to all my blog peeps for your encouraging words, and to my D.C. Tri peeps (Becky, Sandy, Julia, Tuan, Shannon, Lindsey, Carolina, Lynn, Jason, Alejandro, Neal, Hugh, Travis, and all the rest of you!) for putting up with all my bullsh**. 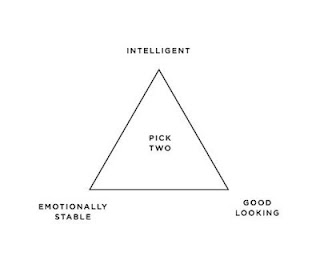 (via Charitini
Posted by jeanne at 8:00 AM 8 comments:

Email ThisBlogThis!Share to TwitterShare to FacebookShare to Pinterest
Labels: life

What do you do when you're in a slump?

I've been in one for a few weeks and I'm scheduled to compete in the Nation's Tri on Sunday.

So, what do you do?? How do you get out/over/on top of this thing? 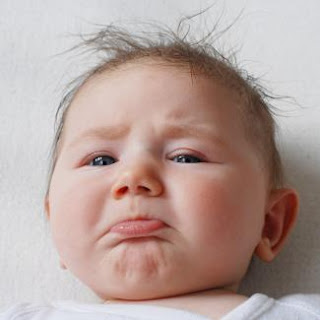 Email ThisBlogThis!Share to TwitterShare to FacebookShare to Pinterest
Labels: slump