A Girl's Guide to VO2 Max

Since I've been running around all weekend bragging that I just got my VO2 max tested, the people I've been bragging to have (naturally) asked me to explain what the hell I'm talking about.

Err..."It's a test where you find out how well your body uses oxygen and then you get heart rate targets for different kinds of runs."

So, let's let Ken Mierke at Fitness Concepts, give it a shot:

Maximal aerobic capacity or VO2 Max, the amount of oxygen consumed in one minute of maximal aerobic exercise, is widely considered the standard test for aerobic conditioning. Improving VO2 Max is a crucial step in maximizing endurance performance in any event lasting four minutes or longer. The higher an athlete’s VO2 Max, the greater the contribution of the aerobic system to energy production. This translates into greater endurance at any intensity

The test involves a 15 minute warm-up on the treadmill (or the bike trainer, depending which activity you want to get training rates for) followed by the donning of a strange, claustrophobia-inducing mask, followed by Ken fiddling with controls and every few minutes leaning over and upping the treadmill speed for about 15 minutes until you want to throw up and keel over.

And then you go for 3 more minutes after that.

Eh, it wasn't so bad. The worst part was that my pals (hi Casey!) kept chatting to Ken, and he would look away from ME ME ME, and I was terrified that he would miss some critical piece of info and I would have to start ALL. OVER.

But never fear: The man is a professional.

A group of us went: Three got tested while running and two while on the bike.

Afterwards, we sat around (posing) while Ken tabulated the results. 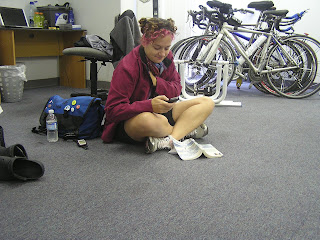 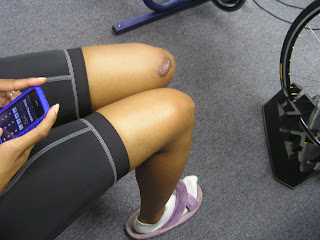 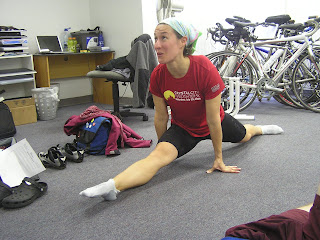 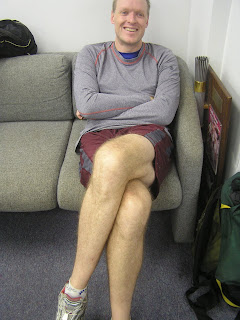 What do it mean??

Ken kept emphasizing that these results are a snapshot of our bodies, and they are only useful as a training tool. But we are all so conditioned to needing to know if we are fast or slow, or fat or thin, taller or shorter, stronger or weaker than the next guy, that we kept asking Ken everywhichway what these results said about us, individually.

So Ken finally parted with the tidbit that the average VO2 max for women is 28. So yay, I'm better than average. Other than that, I really don't know what good or bad is, although my rational brain tells me if YOUR zone 2 heart rate is lower than mine, yet your pace is faster, then obviously your heart and oxygen systems must be in better shape. But that way lies madness.

Better to just do what the man tells me: 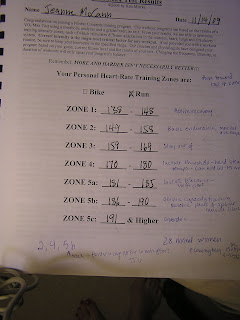 We all got nice fat books explaining what everything means, but Ken broke it down for us. He said we really only need to worry about zones 2, 4 and 5b.

Zone 2 is basic endurance, where you are burning more fat than sugar. (That was pretty much all I need to know.) If you run faster than your (your) zone 2 heart rate, say during long runs, you are not burning fat, and you will not be able to eat french toast afterwards without paying the price.

Zone 4 is your lactate threshold and I don't really know what it means but I like slinging the words around. It makes me feel very runner-y. This is the heart rate at which you do tempo runs.

Zone 5b: Well, I don't like the sound of this, for good reason. It's called the Aerobic Capacity Training zone. This sounds suspiciously like speedwork to me. Ken warns that Zone 5 training carries a high cost and a high benefit, and that a little goes a long way.

Ken says the most common mistake people make is running too fast for the type of run they are doing, thereby expending too much energy, tapping into the wrong fuel source, and not reaping the benefits.

(Please feel free to correct my gross misinformation and oversimplification in the comments. But don't take away my french toast.)

All in all, it was a most pleasant way to spend a Saturday morning, not including the phone call I got in the middle of all this from Number One Daughter, telling me that she had spun out getting on the Beltway and a not-very-nice cop gave her a ticket! My little girl! (She was fine, the car was fine. Thank God.)

I haven't started heart rate training yet, but I'm buying a used Garmin 305 this week ($100, in original package). Somehow I think this will make me magically faster and thinner. I'll be sure to let you know how that works out.

Meantime, enjoy some more pix from our photo shoot: 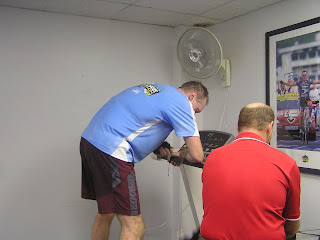 I'm pretty sure I heard Casey ask for a cigarette. 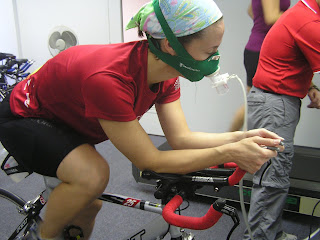 Becky: "If I close my eyes really tight, I will see unicorns." 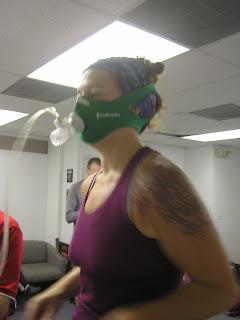 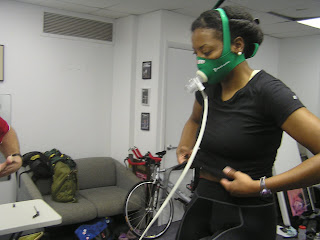 Shelly about to descend. 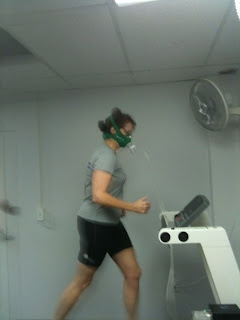 Baby It's Cold Outside

I love this time of year. The leaves are still on the trees here in D.C., but falling freely. The air is crisp. It smells like Thanksgiving, woodsmoke, and fresh starts, overlaid with a hint of winter.

What I don't love is trying to figure out what to wear for early morning runs, when the temps can range from the 30s (F) to the low 50s.

You think I would know by now, but I don't.

Lucky for me, I have this handy-dandy temperature chart (Excel file), from a post on dressing for winter running by blogger Joe Ely, over at my old pasttime, CompleteRunning.com.

The chart tells you what you need to wear for temps ranging from 63F to <10F. Of course you can customize it to suit your preferences, but I think Joe pretty much nailed it.

I downloaded this chart when it was first posted back in 2006, and it has saved me from having to think many times over.

And that my friends, is always a good thing.

Hope it helps you. 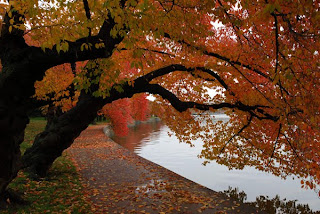 In all the time we spent together on Saturday, I cleverly made sure never to ask Dianna what she'd be wearing. I guessed something orange (she is the running chick with the ORANGE hat, after all).

I climbed up out of Smithsonian Metro station just past mile marker 19, hoping I hadn't missed her, and taking a wild guess that she'd be wearing something orange. At least I had the foresight to ask her what pace she'd be running: 8:30s.

As the crowd streamed by I asked a few marathoners what pace they were running, and pretty much every one of them looked at me like I was nuts and said, "Don't know." (I guess I forgot that you can't answer questions while running a marathon.)

I asked the spectators if they knew what pace these folks were at. No one knew. But on one of those occasions as I was busily chatting up spectators, my back turned to the streaming crow of marathoners someone yelled out, "There goes the 3:30 pacer!"

Sure enough, like clockwork, a few seconds later, she saw me.

Yes, she saw ME, and called my name!

We rushed toward each other, gave a quick hug and she was off. And 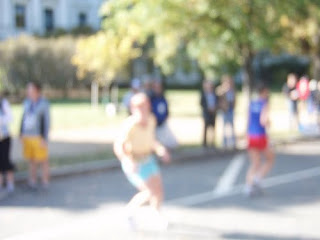 I hurried back onto the Metro, joined the throng and headed for the finish. It took forever to get there, but I fought my way through with minutes to spare. I took up my post at what I thought was around 25.5, and decided to start taking pix to test my readiness, 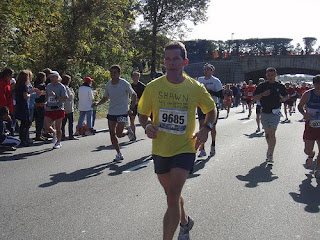 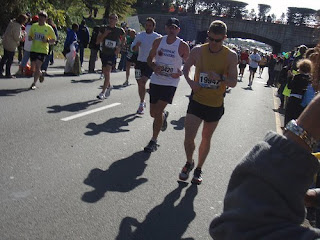 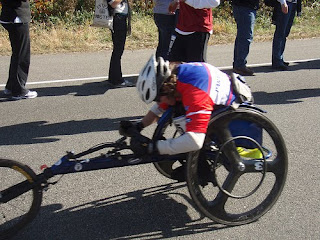 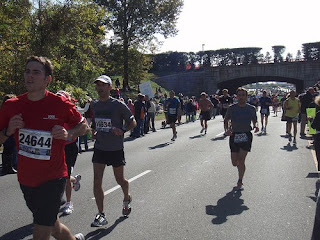 I am so ready!

Very soon, Dianna approached. I tried the old running backwards—at an 8:30 min mile—while talking and snapping photos. I think you can guess what happened. But just in case you are in ANY doubt... 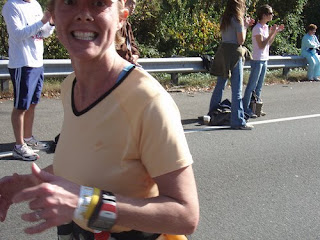 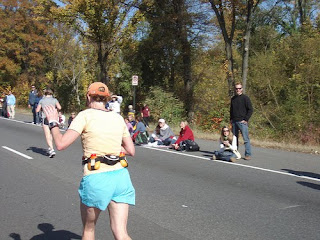 Turns out I was much closer to the finish, a brutal bit just past mile 26 that is straight uphill. I heard the announcer call Dianna's name. We soon caught up with each other and I asked her if she made Boston. She had! But she was in a world of pain. You can read all about it here.

I took some more crappy photos at the end. Unless you were a stranger and then? Perfection!

If you'd like to contribute to my camera fund, or maybe to the send the photographer to photogaphy school fund, you know where to find me!

It was a fabulous weekend, and I don't know how I manage to know so many fast runners. I enjoy basking in reflected glory, I guess!
Posted by jeanne at 8:10 PM 5 comments: