Many of you will have heard by now that my mother died last Friday, Oct. 24. Her funeral is Monday, Nov. 3, in West Virginia.

I don't think I can begin to express the depths of my appreciation to everyone who has written or called to express condolences, but I will try to thank you all individually.

Is it crass to notify people via blogger and Facebook? Maybe, but since that's where so many of my closest, dearest friends (some of whom I've never met) "live," that's where I chose to tell people.

Meanwhile, there is much family drama. Which, if you know anything about my family, you would expect. So far it's been at turns exceptionally painful, sad, hilarious, trying, infuriating, enraging, and so ridiculous that I fear no one will ever believe it. (If you ever watched "Six Feet Under," you have some small idea of the funeral home in West Virginia, just for starters. But that's actually one of the better parts to the saga.) I was allowed no role at all in planning her funeral, because of her manipulative control freak husband, and she is not being buried where she wished (hence the title of this post). Believe me, this is the ultimate exercise in letting go and letting God (please pardon the cliche).

I am trying valiantly to keep up some kind of exercise regimen because it is keeping me (somewhat) sane.

I returned to Bethesda this past Monday, went to work, but am taking Friday off to go to the beach with a friend for a day of rest and restorative yoga before traveling back for the funeral.

Thanks for all the heart rate training advice. I'm going to write all your advice in one post...later.

Right now, I've got some stuff going on, so I'm taking a break. Hopefully it will be short, because I know how you people need me.

Not to be mysterious...my mother is very ill. Plus other stuff.

But for right now...

I dreamed last night that I ran a marathon and that was my time.

And then I woke up. Bummer.

Is it an omen? A message? An invitation? A WARNING??

'Splain It to Me

I've started Heart Rate Training. First thing I did was figure out my max heart rate by doing a 3-minute step test (outlined in the handy TIMEX book that came with the HRM they gave me): step up and down on a 8-inch step for 3 minutes, get a number, add 45 to it (45 if you're of average fitness, 55 if excellent) = 179. Just for kicks I checked out this NEW IMPROVED formula and got 172. (208 - .7(your age))

Here are my target heart rate zones (according to the same book):

When I run, my heart rate shoots to above the high end of z5 immediately, proving that 179 is most definitely NOT my Max Heart Rate. I slow down. I slow down more. I sloooooow waaaaay down. I'm now doing 12:30 min miles and I'm at the high end or above, of z4.Z4!!!

It gets worse. In spin class last week, my average heart rate was 166 and my max? 213. TWO HUNDRED THIRTEEN.

But the funny thing is I don't feel like I'm dying or anything.

Have I got this right?

So, tell me please: HOW THE HOLY HELL DOES THIS MAKE ME FASTER??
Posted by jeanne at 6:42 PM 22 comments:

[If you are under 50, you might want to come back later. If you are over 50, and you haven't had one yet, it's time. Colon cancer is the third most common form of cancer and the second leading cause of cancer-related death in the Western world.]

Here's how you do it.

First, go to spin class. Then spend the day fasting, drinking only clear liquids (including coffee, thank God). At the end of the day you will feel svelte and supermodelish and filled with willpower. Enjoy that part while it lasts.

In the evening, drink a gallon of stuff available only by prescription because it is very likely toxic and basically makes you explode for the next two hours.

Now you REALLY feel like a supermodel (no offense to all the supermodels reading this).

Have your only child drive you to the outpatient center and on the way there, discuss the fact that you don't have a living will ("Moooooom, stop it!")

Things happen like clockwork. Until the anesthesiologist sees my heart rate of 45. Which I'm guessing is elevated because I'm so nervous. (Am I actually alive?) People get concerned and run around for a while. They stick a thermometer on my forehead (see, now you wish you had photos).

They cover you with warm blankies, wheel you in, stick in an IV, and before you can say "Bob's your uncle," you're off to your happy place and done in 20 minutes. Another 20 minutes to come back to reality. More warm blankies, a cup of tea, and a few graham crackers and you're home, feeling all clean and shiny, ready to tackle the world, since it's only 11 a.m. and you have the day off. "I totally could have gone to work," you think, "since I'm feeling fine!" New plan: Do laundry, clean house, sort mail, go for a run!

What actually happens: Lay down. Wake up six hours later.

Email ThisBlogThis!Share to TwitterShare to FacebookShare to Pinterest
Labels: colonoscopy

I had my first appointment with my tri-nutritionist yesterday. She measured my body fat with some newfangled piece of equipment that shoots electricity through your body (something like that). Result?

But the lovely Rebecca has a plan. I loves me a plan. My plan is to drop 10 pounds. Her plan is to get me to 30 percent body fat, and then skip on over to 25 percent body fat. Her plan will be delivered at my 2-week follow up, in um, 2 weeks. (It would have been one week but I have my COLONOSCOPY scheduled for this Friday. Is it strange that I'm looking forward to it because it means I get a day off from work?? Also, do stand by for complete coverage. If Katie Couric can do it, so can I.)

It's well established that people who log their food every day have a statistically higher percentage of weight loss than those who don't (not that that's ever convinced me). But this time, what the hey, I'm logging my intake over at livestrong.com, which has forums, workout logs, a database of every food item on the planet, and calculates everything automagically.

Nutritionist-to-the-Ironmen R. also said I only need to eat half a banana or a half-glass of orange juice before working out in the a.m. I had been eating a bowl of oatmeal with fruit and nuts and soymilk. (So. Freaking. Healthy.) Then I'd workout. Then I'd get to work and have breakfast number 2. Apparently? That's one too many breakfasts.

So far I am TOTALLY FOLLOWING THE PLAN. (Today is day one.)

This was also day one of return to spinning. I discovered that my YMCA has spinning classes. And attendance is included in my membership fee. That fee that I'm already paying monthly. So all last year I paid my YMCA fee and then paid again to go spin at another gym. Granted it was worth the money to indulge my spin-instructor crushes.

I don't think I'll develop much of a crush on this spin instructor, although she's very lovely. However, she only played two "real" songs: Coldplay and Eva Cassidy. The rest of the time she played that technoeuropeanfakemusic (no offense). I felt like the lights should have been off, I should have had a drink and a cig in my hand, and someone should have feeding me pickup lines. Other than that, it was great! One hour in the bank of what-do-I-do-during-off-season.

Thirdly, the lovely people at Timex graciously sent me a heart rate monitor, which is terrific since I am too cheap to buy one. 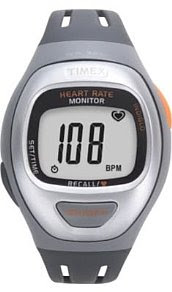 They asked me to check out their triathlon training plans at www.timextrainer.com, and tossed in a heart rate monitor. I haven't checked out the tri training plans yet, but I have tested the heart rate monitor. And my verdict is this: It works perfectly. Except it's a little basic. It reports 1) your heart rate while you're exercising (although you can tap a button to get elapsed time but that's kind of a pain), and 2) your elapsed time at the end along with 3) your max and average heart rates during your exercise. So no splits. And no storing of any data.

So I can use this, but then I'll need to wear a watch if I want to time splits. If you're going to spring for a heart rate monitor, the

is probably not the one, unless you ONLY want your heart rate.

Fourthly, I found a new running trail. I've lived in Bethesda for 12 years. I don't know when this trail opened, but it's RIGHT ACROSS the street from the YMCA to which I've been going for years. Sometimes it actually pays to look up. Especially when you're driving.

Anyway, I found the Bethesda Trolley Trail. It has bridges over two highways, it goes up and it goes down. It abruptly stops at some places and then starts again. It's near home.

I don't know whether it's the newness factor, but I've been pumping out 4.31 miles (slowly) never even thinking about walking (jinx).

I could go on, but I got me a debate to watch. Don't think that I haven't been developing new skills though, people. NBTR is all about the skillz: 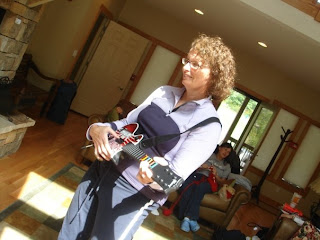 I Swam 1750 Meters This Morning

Am I the last person on the Internets to see this?