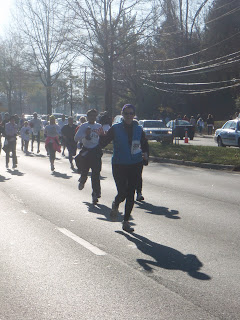 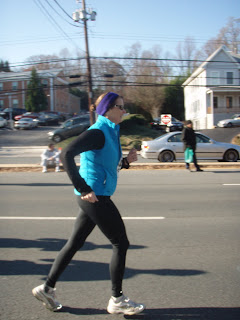 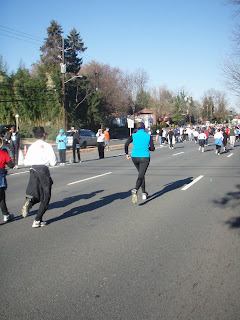 And ... the obligatory butt shot. 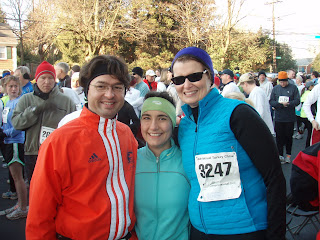 It turns out that if you eliminate that swimming and biking stuff beforehand, you go waaaaay faster.

For a small town local race, this thing is huge. Why can't I find a race where there are no more than three people in my elderly age group and two of them are on crutches??? WHY?? It took 10 minutes to cross the mat, and it didn't start thinning out until mile 4. If I'm complaining about slower people in front, you KNOW it's crowded.

Since I started running sans headphones, I'm much more aware of my surroundings. This is not necessarily a good thing. I'm running along, and suddenly I hear an incessant squeak squeak squeak. I turn and ask the older gentleman running nearby: "Are you squeaking??" He responds: "Oh, that's just my METRONOME." Seriously?? "Yes, it helps me with my cadence." "Well it's driving ME crazy!"

I turn to the person next to me to say something snarky about metronome man, only she's plugged in, as is just about everyone else. All around me drift the sounds of garmins beeping and iPods blasting music so loud it comes out of the top of peoples' heads.

Is it possible I've become a running SNOB?!

My goal for this race was sub-1:15, because it has a lot of uphills and few downhills. So my strategery was: Go out fast, fly on the downhills, and limp my way to the finish.

So much for strategy!

Sidebar: I've been in a funk for days now. In fact, Number One Daughter told me afterwards that she was afraid if I had a bad race I would be a real pill to live with. Turns out that my mood has magically lifted. Do you think it was the running, or the PR?

HAPPY THANKSGIVING!
Posted by jeanne at 11:26 AM 22 comments:

A Cornucopia of Minutiae

Big congrats to the always amazing and prodigious D.C. Rainmaker for winning Best of the Blogs. And for nailing the Philly Marathon today. Holy cow!

I think my bowling injury is gone, thankfully. But bowling did manage to totally TAKE out one of my younger colleagues--who threw her back out and had to take a week off from work. So much for group bonding. I'm going to propose that next time, we eschew physical pursuits and just go drink.

Meanwhile, I'm back training. My schedule looks like this:

Sunday: Swim class (loads of fun, and I still suck)
Monday: Off
Tuesday: Spin class 6 a.m. (this is supposed to be 60 minutes but barely hits 45, don't understand why.)
Tuesday night: run on YMCA treadmill, where you get kicked off after 30 minutes. I manage to crank out 3 9:30 minute miles, which is obviously a complete lie since there is no replicating this in REAL LIFE. Say, outdoors, for instance.
Wednesday: 6 a.m.: swim drills from class. Set new time for swimming 100: 3:30. Sigh.
Thursday: Spin class 6 a.m.
Thursday: run 4 miles outside in the cold, at 4:30 p.m., in the gathering dusk. Am hanging on around 10:30 minute miles.
Friday: OFF!
Saturday: Run with my newfound SnailTrail runners. I am waaay out front again, with two other women. Eight miles finished in....1:37!!! Which is a 12:08 minute mile. In my defense, it was 22 degrees out and windy. It turns out that I'm discouraged even when I'm leading. The good news that I successfully avoided the evil post-run petite heroin-laced Starbucks vanilla scones.

Here we are at Sunday again, gearing up for swim class tonight.

I'm in town for Thanksgiving for the first time in several years, so I have the opportunity to run the YMCA Turkey trot, a 10k. I've only run two 10ks ever (is that possible?? What do I have against 10ks???) and apparently my PR is 1:07. So I'm pretty sure that will stand, but hope springs eternal!

And I'm still pretending that I will be running the Fredericksburg Blue Gray Half Marathon on Dec 14 (Hi Susie and David!).

In other news: Apparently you can only watch my television ancien comfortably, from one chair in this house. 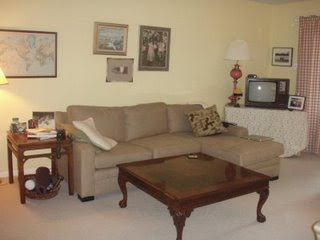 Just try watching TV from this couch. You'd need a chiropracter.
I can't move the TV bcs the cable is on that side. And I can't move the couch cuz that lounge-y part is part of the couch and won't work on any other wall.

Believe it or not, this leetle conundrum led to a fight with number one daughter last night! I have so many ridiculous problems...it's just ridiculous.

So, it's OPEN MIKE. I need advice on my training sked, and my furniture arranging skills. Don't be shy!
Posted by jeanne at 2:42 PM 22 comments:

People, I'm a highly trained triathlete. I can swim, run and bike. I am in Good. Shape.

So imagine my surprise when last Thursday my office decided to treat us worker bees to a few hours of bowling, and I learned that: I have no leg muscles!

Apparently? Bowling is nothing more than a prolonged series of lunges, all on the same leg. Over and over and over.

So of course, I woke up Friday having pulled, strained, sprained or otherwise damaged something in my hamstring. Sort of up near my butt. (Or maybe I sprained my butt. Sigh.)

I'm still trying to train for the Fredericksburg Blue-Gray Half-Mary on December 14. Which it turns out, is like four weeks away.

I was up to 9 miles a few weekends ago, but got very little running done in the past three weeks.

So, on Saturday morning, I put on my anti-anxiety cap, and wandered out to meet a new group of runners: the C&O Trail Snails, who bill themselves thusly:

Do you love running on the C&O canal towpath? [Yes!]
Are you more motivated when you know you will be running with others? [Most definitely.]
Are you happy to be running and not so concerned about your pace? [Err, I'm working on this one.]
Have you had trouble finding a group to run with that is not overly
competitive? [Hells yeah.]

I was there promptly at 8 a.m. on a rainy HOT (global warming) muggy November Saturday morning, and ran 7 miles with another woman who is a solid 11:30 min miler. (And hello, we turned out to be the FAST ones in this group. Woot. My kind of group! Although I do recognize that this might probably not be the best training for me. On the other hand, is always being LAST good for me??? I think not.)

By the end of 7 miles my butt/hamstring thing was screaming. I ended up limping to the car. And then limping to StarCrack where I had my usual decaf skim latte, and where the following convo took place (let's hope) in my head:

You know what? You just ran 7 miles girlfriend! If anyone deserves a Petite Vanilla Scone, you do! NOD can get her own damn breakfast!

And before you could say Bob's yer uncle, I had consumed 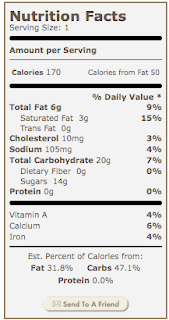 They don't call it StarCrack for nothing.

Still to come:
A complete report on how my nutrition plan is coming along, plus updates on spinning and swimming, strength training, and not-heart-rate-training.

I can hardly wait. 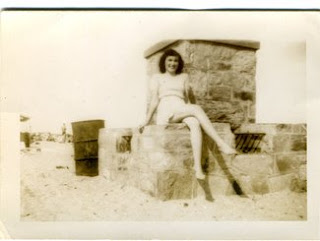 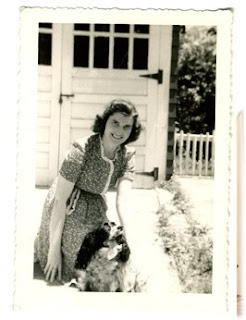 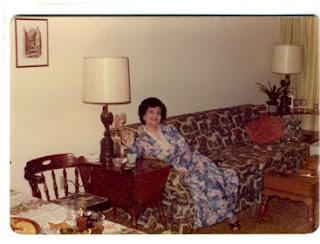 She did like to party though. Also, undated, but I'm taking a wild guess from the furniture (all Colonial, all the time), that this was in the '70s, when she finally got her own apartment.

"That's not the woman I knew," was my main thought as my eldest half-brother began sharing his memories of my mother at her funeral.

My brother spoke of my mother finally finding happiness with her third husband, after two failed marriages, with whom she lived in the Bay Area for many years, before moving to the wilds of West Virginia only seven or so years ago. He remembered her for her sense of humor (I do concede that she had one), and for a lightness that she had about her that he said he inherited (this is where he started losing me), and that she never held a grudge (OK, now we're talking about two different people).

Of course, she didn't raise him. He and my half-sister were raised by their father and step-mother in California, while my mother and father lived in New Haven, raising me and my brother.

It was a tough funeral—even as I write I realize how ridiculous a statement that is. Are there easy funerals? Where everyone has had a chance to, you know, make up and laugh and remember good times and there's no pain ... you know, like the Hallmark cards of funerals?

One week after Mom's funeral, I went on my church's yearly silent retreat here.

It's about a five-hour ride from D.C., so I rode up with three woman I had never met before, and none knew my mother had just died. One woman started talking about Whidbey Island, and about a relative's funeral she attended there. How the entire family helped dig the grave, how the mother's ashes were sprinkled in, how the grandchildren placed mementos in the grave, and how everyone then covered the ashes back up.

And I found myself feeling jealous—of a funeral.

She was a Depression baby, the first high school graduate in her family of six, and determined to have the nicer things in life. And that led to a life of "creative financing," as she liked to call it. She worked at Yale Law School, first as an at-home typist, then as a legal secretary, when women didn't work. After her death I found a three-page letter from her bosses to Yale's human resource office commending her work, saying she was the "best secretary" they had ever had, did the work of "three people," often worked weekends and nights, and asking for a big raise for her.

I also found a handwritten note from President Gerald Ford, thanking my mother for all her help during some visit he made to Yale.

So many things I could write about her, but I won't.

The woman I knew as a child was desperately unhappy. DESPERATELY. She tried leaving once, when I was in 6th grade, but took me and my brother with her.

She finally left for good—by herself—when I was in eighth grade. I found out when I saw her dresser had been cleaned out. 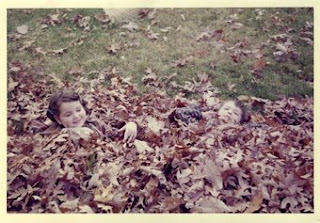 I saw her regularly throughout adolescence. She'd meet me and my brother at a local diner for breakfast every now and then. 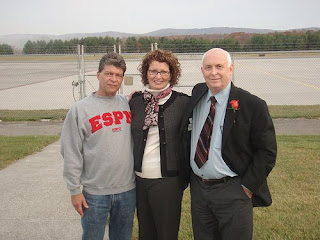 Reconnecting with siblings: My one-year-older brother T., me, and my nine-year older brother, B.

There was a long drawn out divorce. Long, contested, bitter, bitter divorce.

My mother was a strong person. No question she followed her dreams. She loaded up her car and moved cross country to Oakland, Calif., (when she was in her late 50s) with her husband-to-be, while I was in college, and started a new career at Clorox, rising to executive secretary to the president, where she worked until she retired at age 75.

She had moxie, that one.

So when I was asked to speak, I was at a loss. So much to say that was better left unsaid. So much hurt.

Instead, I read this:

The Lake Isle of Innisfree

I will arise and go now, and go to Innisfree,
And a small cabin build there, of clay and wattles made:
Nine bean-rows will I have there, a hive for the honey-bee,
And live alone in the bee-loud glade.

And I shall have some peace there, for peace comes dropping slow,
Dropping from the veils of the mourning to where the cricket sings;
There midnight's all a glimmer, and noon a purple glow,
And evening full of the linnet's wings.

I will arise and go now, for always night and day
I hear lake water lapping with low sounds by the shore;
While I stand on the roadway, or on the pavements grey,
I hear it in the deep heart's core.
--William Butler Yeats 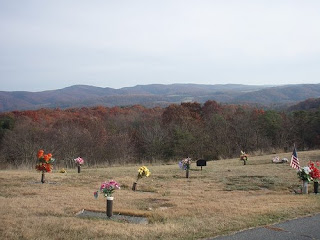