...And then, from seemingly out of nowhere, I summoned up the strength and speed my training had been lacking all winter, to cruise through the finisher's chute in 2:20, a PR!!!

Well, the National Half Marathon is this coming Saturday, and I'm not feeling it. I'm extremely pretending that it's no big deal, that I'm not going to mind IN THE LEAST if I finish in 3 hours, that it's a training run (for what, I don't know), that my damn PF isn't actually getting worse, blah blah, etc.

Saturday was our last "group" training run. Such a pity that I started out so young and full of dreams!

Over the course of the past few months, our group (the so-called "slow" group, not that my peeps know the meaning of the word) dwindled to a total of four: our coach, two young chicks, and me. The two other chicks ran their half, the Virginia Beach Shamrock, two weeks ago. Since January, I have been gradually falling behind, slowly but surely (get it???) each week.

Saturday we were scheduled for six miles, but the two chicks who had ALREADY run their half marathons opted for 10, and I had to agree that it surely couldn't hurt me. So off we went, and as usual, I started in the middle, K and E behind me running together, and Coach in the not-too-far-ahead distance.

And as usual, around mile 3, the chicks passed me, we ran even for a while, and then, they became as tiny little dots in the distance. And then? I stopped caring about my 10-miler half-way through it. I started walking. Stretching. Talking smack to myself. You know. The USUAL. Ten miles in 2:16. I must have been going backwards for part of that.

Sunday was better. Sunday was Easter! And to make up for Saturday's misery, I dragged Number One Daughter on our annual Easter Hike on the Billy Goat Trail, 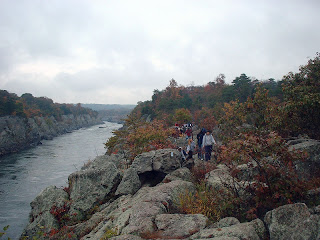 a rocky, strenuous, and somewhat treacherous hike (especially if you are carrying a NEWBORN baby on your back, like the guy in front of me was....arghhhh!)

Another guy was in shiny, tasseled loafers. No really. You would not believe what people wear to hike this trail. High heels.

But I still had to feed the TRI-beast. So NOD dropped me off at work, and I did my second-ever mini-brick: I rode 10 miles in 50 minutes (note to self: Self? You feel the wind a LOT more when riding. Hence, you get COLDER than when you are running. See note above about appropriate dress), froze my ASS off, and then did a 10:30 min/mile.

I will never get over what it feels like to get off a bike and then run. NEVER. Just picture yourself running with your feet in concrete. It's so funny, I think I actually laughed out loud. While trying to run. Two things that don't generally occur together in nature.

Biking is so much more fun than running. I'm sorry to say it, my running peeps, but it is. Even given the fact that after a short ride, certain, err, parts of my anatomy are, um ... not feeling so good. Good thing I've already got that daughter of mine!

In summation, for those of you following along at home:
Saturday: 10-mile crappy run;
Sunday: 2-mile hardcore hike, followed by 10-mile bike, followed by 10:30 mile run, followed by grocery shopping, followed by lasagna-making (the way my Italian father made it, with meat, AND hard-boiled eggs) in honor of NOD, even though meat is gross and I'm not doing her any favors by feeding it to her.

That goat trail looks awesome, I'll have to check it out some time.

And uh-oh - it sounds like you might be converting from runner to cyclist. We're going to have to address that somehow. Next thing we know you'll be going all fishy on us.

I have a bad feeling we're slowly losing you to the dark biker side. This despite the fact that you can actually freeze your a$$ off as you say while biking, due to the wind factor - what, were you biking backwards, or is biking not all that it's cracked up to be. Cracked up, mwahahaha!

Have you tried compression tights? I don't have any, but they're supposed to be helpful for tri athletes. There are also calf sleeves, for lack of a better word; they look like leg-warmers, only they are form fitting. Good job on getting your "bricks" in.

Nice going on getting the ten in, and on the ride followed by a fast mile. (That's "transition", right? Dunno what "fishy" or "brick" are. Pink Floyd Put Another Brick in the Wall?) I'm glad you're out there working, you put in a full weekend! Plus cooking (does putting a frozen pizza in the oven and setting the timer on 25 minutes count?) and communing with NOD. Sounds like you were able to put 12 pounds into a ten-pound bag to me. And the Billy Goat Trail! First time I hiked it (I got dragged there) my companion was wearing SANDALS. It was August at noon. We had NO water. It was maybe the thirstiest I have ever been.

Here is wishing you good luck, weather, and fun in your upcoming event.

Leave some water for me. I may be running 4:20 (uh, yeah, for the HALF) if this pollen doesn't clear up right quickly now.

And meat is not gross. Meat is TASTY. Yum. I eat more than your share, so balance has been maintained in the universe.

just how does that egg thing work with the lasagna? i'm confused.

Oh Jeanne... I honestly don't know what I ever did before I found your blog!?! LOVE IT!

What a busy weekend. You make me EXCITED for 51.

What a trail! High heels? What's that about? I guess to each his own.