The Coldest Half-Marathon Ever

"We should go somewhere warm in January, " I said to Number One Daughter back in November '09.

"Yay!," she retorted. "I know, let's run a half-marathon with Runner Susan! Down South! In Texas! Where it's warm!"

So, off we went to meet the inimitable Runner Susan, whom I have known virtually, for, well, I don't know how long I've known her. (I just searched my gmail, and the earliest e-mail from her is April 2006. I think we first started getting to know each other when she wrote for CompleteRunning (a site I used to edit, which is sadly, now dormant).)

Susan is a highly talented writer and Web designer, and just the funniest and funnest friend I had never met.

Anywho, so NOD and I booked a trip and down to Dallas we went, expecting, well, WARM.

Cuz last time I looked, TEXAS was a bit further SOUTH than say, Boston. Or Maine. Or even D.C.

We got to Dallas airport at 11 p.m.-ish, and darling Susan was there to pick us up. Right before we got to her car, I whispered to Deirdre, "Oh what if this is awkward??"

Cuz you know...we had NEVER met. It could be the worst, longest, and most expensive blind date in my checkered dating history.

Two seconds after climbing into the Soozemobile, though, it was just like coming home.

Like we'd known each other for ages. Like we were reuniting after not seeing each other since high school (where I would have been her teacher, since she's a few years cough younger than I am).

But anyway, the point is: It was easy. 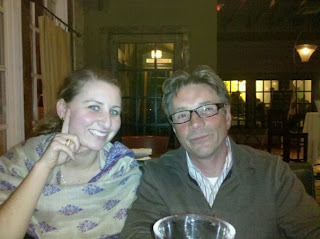 NOD, Chef. They are tight.

We stayed with Susan Friday through Sunday, and somewhere in the middle there, Susan and I ran the Coldest Half-Marathon ever (AKA the Texas Freaking Half-Marathon).

I have seriously never been so cold in my life. And I'm from New England. I've lived in Boston. I know from cold.

The course wound around what I'm sure is a lovely scenic lake at some time of the year.

With water in it.

That blew in my face.

As I ran in a circle.

The wind was changing direction just to mess with me.

Number One Daughter ran into some trouble with her training (as in: forgot to do it), so ran the 5k instead. She brought this guy with her. 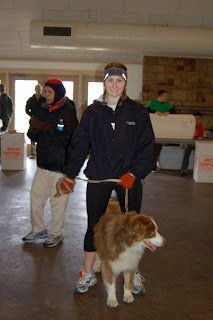 (Well, so say the results anyway, and we know they never lie.)

And then there was moi.

Did I mention I was cold??

The race announcer said afterwards that with the windchill the temperature was -2° Fahrenheit (-18.88° Celsius).

By mile 2 I was in serious face pain, which was good because it took my mind off the cramp in my right calf. I was (as always!) contemplating a DNF.

Susan and I started together but she took off after, oh, 2 minutes, and I didn't see her again until mile 11 when she passed me heading toward the finish, while I headed on a dogleg away from it, yelling, "You're almost there," the universal lie reviled by all racers. Susan, seriously??

Somehow, don't ask me how, I managed to will myself around that freaking lake. I had my iPod and listened to two episodes of This American Life.

The crowd was small and I was quickly at the back, but surprisingly, I was not alone. And I wasn't last!!

I lurched from mile to mile, just willing myself through.

At mile 7, the cramp in my calf started screaming. I stopped and stretched. And then carried on.

Cuz that's how we roll.

We had many other adventures, involving taking 100,000 photos, clothes, shopping, wine, a total makeover, eating, and clothes, but that will have to wait for another day. 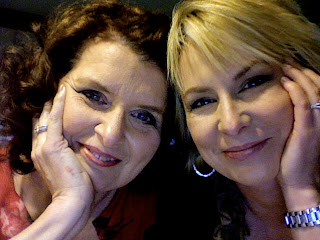 You are the bestest, Jeanne -- virtually and in-person-ally. I think that's a word? I've been snowed in with Chef and Cabernet for 16 hours now, so no telling what is real and not real.

Remind me to give you your fifty bucks for that "highly talented" line when I get to DC. ; )

Very interesting. Cold in Texas - who knew? And that race was not your best and not your worst which of course means it was perfect - except for the cold.

Runner Susan is amazing. Next time we must ALL do the race only let's find one in the spring so it might be a little warmer.

And here's a hint - move the dial on the iPod from NPR talkies to some serious, hard core music. You will run faster. Promise.

Minus two? Seriously? Wow! And running next to open water too. Haven't you ever run around Haines Point and noticed what water does to wind? And where did NOD's 21:15 come from? I'm totally jealous!

Nicely done on the half! It must be that you are so used to this cold ;) Plus, you placed well in your age group too. Great start to the season!

That's all I have to say.

Goodness me, I got cold just reading this! Well done for surviving, never mind finishing!

it sounds like a sensational weekend :) and your training is obviously paying off (note to self: be more like Jeanne)

That Susan is something, isn't she.

Glad you had a great trip, sans outdoor warmth. From the photos Susan has on her blog, I'd say she and The Chef compensated nicely for their city's inhospitable weather.

Well run even if it was FREEZING! From the photos I have seen on fb it looks like you guys had a blast!

Oh my have I been waiting for your post. Seen the photos, seen RS's brilliant blogpost but where were you? Stuck with a hot texan in a hottub somewhere?

It sounds like the best race weekend ever - where the racing is incidental. The makeover is fantastic as well. RS clearly knows her stuff, or where to get some. Congrats on the race as well - incidentally. And oh yes someone said to listen to more speedy tunes and I agree. Much as I adore Ira, and I really do, he does not get you moving. You need to get yourself some podrunner mixes. I know I know but listen. I like Neil Diamond and even I can listen to this weirdness. I run faster with podrunner and so will you. Get moving girl!

Very nice. You shaved off 6 minutes in about a month - that's quite solid. Congrats!

Now get back here and do some shoveling...

The blue northers are amazing, sometimes.

What an adventure! How wonderful! This winter has certainly been a doozy...

A remarkable never-to-forget adventure with my favorite running partners ... and I wasn't there. Not even to thumb up or down the shopping options.
Oh well... it was terribly cold that weekend and ti doesn't seem to be easing up two weeks later.

At least pitchers and catchers report on Wednesday!

Yes, I had no idea how cold Texas got until I had family move there and visited and ran a marathon there in February.

But you did very well despite the cold. Congrats!!

I would say come to FL to run in January next time for warmer weather but it's been one of the coldest winters ever this year. Then again, it could also be 70+ degs, who knows?

Awesome. I'm glad to finally read your report. I met Runner Susan this year too and I would agree: her and the Chef are fabulous!

What a beautiful picture that is of the two of you. :)

Congrats on braving the elements. Next time I whine about cold CA I will remember your TX run.
I am glad I found your blog.

Glad you survived that cold run. Weather everywhere south is totally screwed up this year. But still, you had fun. And good time too. Maybe you have been afflicted with my usual marathon/triathlon predicament: no matter when, no matter where, no matter how far away I go, where it should be warm most of the year, a cold front follows me and the weather totally freaks out--just while I am there.

Good job, Jeanne! I never would expect Texas weather to be -2. Might as well run in Mpls.

It's been a month already, does this blog still have a pulse? have the cool kids come out of hibernation yet?

We may be running soul mates j/k. Good job on completing the race in the frigid temps!